Ice-pick Lobotomies * Straight Jackets * Seclusion Cells * Ice Water Baths Sounds like scenes from a horror movie. Welcome to the 19th century asylum. It held the demented, the insane and the unfortunate. Come explore ghosts and haunted history with author Sherri Brake. Built in the 1860's to house 250, the asylum in Weston West Virginia was overcrowded with 2,400 patients by the 1950's. Barbaric treatments, unsanitary conditions coupled with scandals, murders and suicides made for a nightmarish situation. To some it was a haven from the streets, to others it was hell on earth.

176 pages with over 100 images including historical photographs, postcards and newspapers articles.

Kicked in the Head by a Horse

These were reasons for committal to the asylum in the 19th century. Delving into 19th century asylum life was just as I expected. Barbaric style treatments such as bloodletting and insulin coma therapy were practiced at the Trans- Allegheny Lunatic Asylum and at other institutions. Seclusion cells and confinement cribs were utilized to control violent patients. Unfortunately, there were innocent victims of the asylum due to misdiagnosed conditions and unfortunate situations. Many spent their entire lifetime at the asylum, only to end up in an unmarked grave on a lonely hillside.

This book is my own meager attempt to outline some of the asylum's darker history. I have included various paranormal evidence and input from past paranormal investigators who dared to spend the night walking the dark hallways of the asylum. I hope you enjoy the Haunted History of the Trans Allegheny Lunatic Asylum. Paperback/168 pages/over 50 images 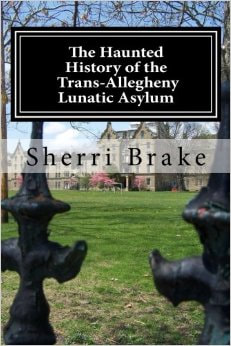